Repost: The Science of Trauma, Mindfulness, and PTSD 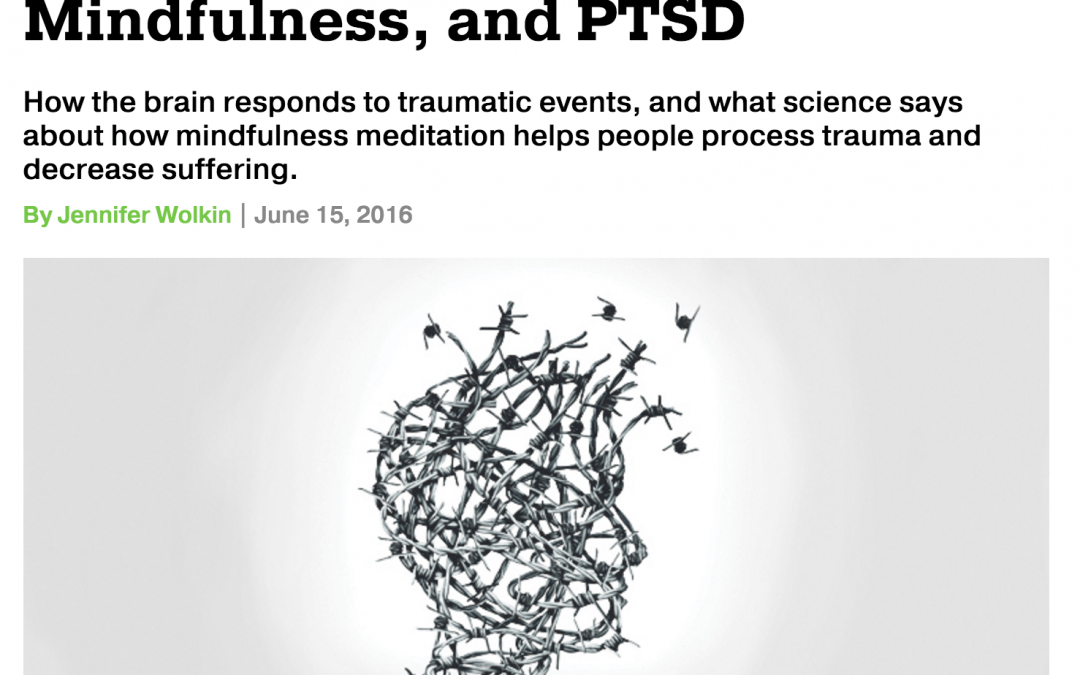 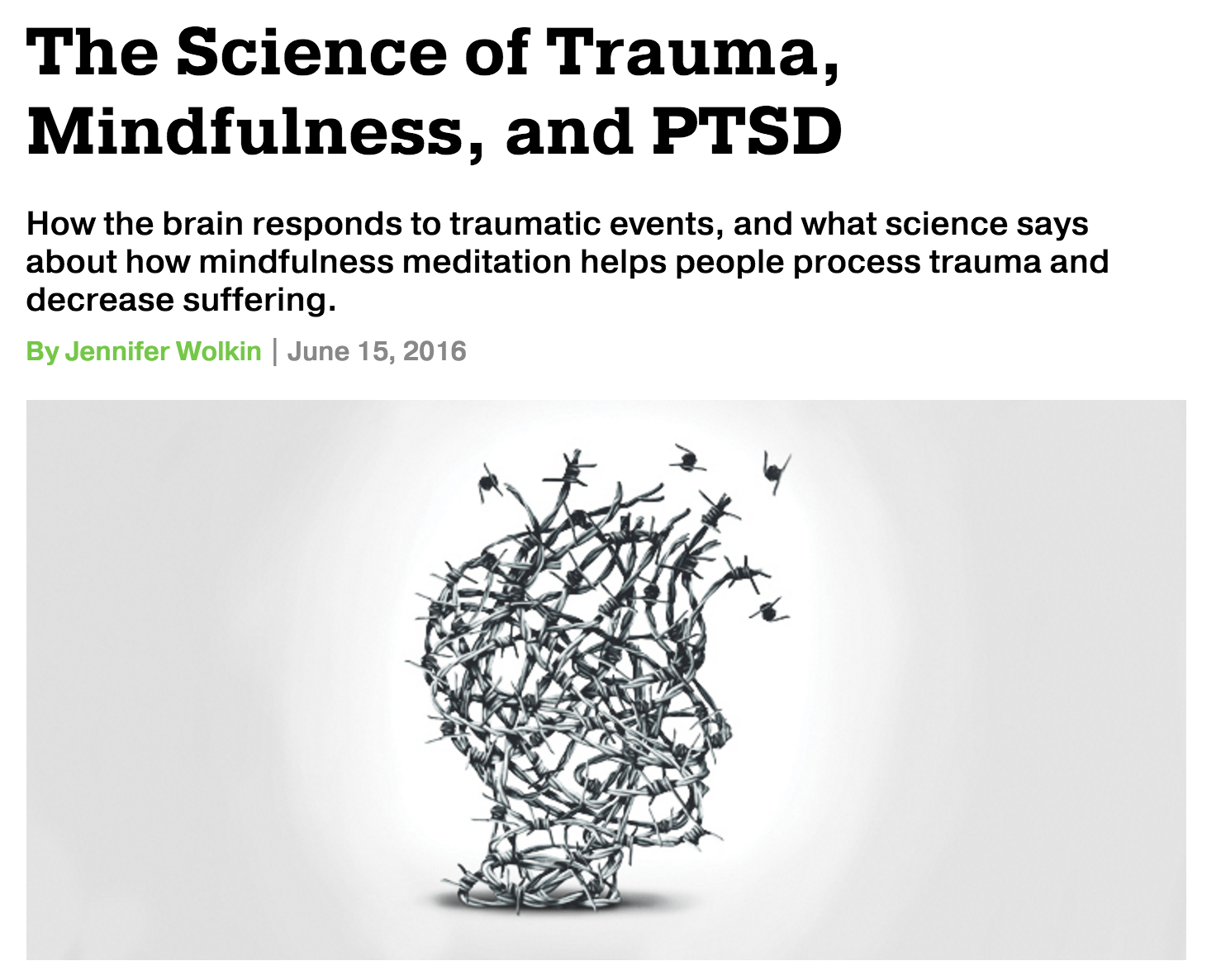 If we were able to prove that individuals suffering from PTSD are experiencing reversible neurological changes, would that help to alleviate any taboo associated with trauma, so sufferers are able to get the treatment they need? New treatment protocols for PTSD that integrate mindfulness techniques may make that a possibility in the near future.

Mindfulness-based techniques in this context have recently gained traction with the support of more empirical findings. Overall, there is a lot of evidence supporting mindfulness as a treatment approach for adults with PTSD, and a recent burgeoning literature corroborating positive neurological changes is following suit.

First, I want to define trauma and PTSD.

Trauma is a broad term, and according to the American Psychological Association (APA), it is an emotional response to a terrible event. Unfortunately, said terrible event can constitute a plethora of possibilities, including combat, rape, natural disasters, and assaults. There are other potentially traumatic events, and though less talked about, are no less palpable. Ultimately, any event might be considered traumatic if you have experienced and/or witnessed a threat to your life, your body, your moral integrity, or had a close encounter with violence or death.

Usually, when we are faced with danger, we go into fight-or-flight mode, during which our bodies release hormones to help us act faster, to either fight or flee. Trauma inhibits this very normal and evolutionary response to danger. What trauma does, instead, is elicit a profound sense of helplessness, during which one feels paralyzed from doing anything to be relieved from the circumstance.

Post Traumatic Stress Disorder or PTSD, is described as a severe response to trauma, and it is most powerfully characterized by three prominent symptoms, which include:

In addition to these three expressions of symptoms, PTSD causes a huge deal of distress and severely limits functioning in many different domains of life. As its name implies, PTSD is technically a “disorder”, and it is listed in the fifth edition of the Diagnostic and Statistical Manual of Mental Disorders (DSM-5).

I respect the need to classify something as a disorder in order for rigorous assessment of specific symptoms that can lead to a comprehensive and individually-tailored treatment plan. Yet, I believe, that there’s nothing truly disordered about having a reaction to seeing atrocities and tragedies beyond our mind’s ability to fathom. To hear more about this point of view, listen to this poignant, sensitive and informative interview with Barry Boyce, editor-in-chief of Mindful magazine.

There’s nothing truly disordered about having a reaction to seeing atrocities and tragedies beyond our mind’s ability to fathom.

The Brain and PTSD

In order to understand the neurological implications of PTSD, it is important to quickly parse the concept of neuroplasticity. For many hundreds of years scientists thought that, like physical development, once the brain reached maturity, it ceased to grow and develop in any way.

The modern view is antithetical to this, given research that continues to show ways in which the human brain is in a constant state of change. In this way, it is believed, new experiences actually impact our neural circuitry; that over the course of a life, our brain map reflects new and changing pathways. This idea is expressed eloquently and through case example in one of my favorite books, The Brain that Changes Itself, by Norman Doidge, MD.

Most of us view this notion of a neuroplastic brain through a rose-colored lens. Yes, neuroplasticity affords the brain an opportunity to heal from injury. Let’s not forget, though, that experience can also negatively change someone’s neuro-profile. So, in sync with neuroplastic principles, when trauma is encountered, the brain changes in response to the event in order to cope and adapt to the situation. These brain changes often don’t serve us going forward. While our brain adapts to develop a psychological defense against further trauma, it is not a brain that thrives long-term.

Neuro-imaging techniques, such as MRI and FMRI, have allowed scientists to examine brains of patients suffering from PTSD. Three of the areas impacted by trauma include the

The amygdala is a structure in the brain’s limbic system (known as the emotional seat of the brain) that helps determine whether or not a threat is approaching, and if so, sends out a danger signal, initiates the fight-or-flight response, and then helps indicate when the threat is gone. When one has experienced trauma, the amygdala remains hyper-alert to even non-threatening stimuli, and activates the fight-or-flight response system despite being safe. While experiencing PTSD, the brain can get caught up in a highly alert and activated loop during which it looks for and perceives threat everywhere.

While experiencing PTSD, the brain can get caught up in a highly alert and activated loop during which it looks for and perceives threat everywhere.

The hyperactive amygdala is constantly interacting with the hippocampus, the area of brain that plays a role in memory function. Brain scans have found smaller hippocampi in those with PTSD, perhaps reflecting the impaired memory experienced post trauma. Usually, the hippocampus works to connect and organize different aspects of memory, and is responsible for locating the memory of an event in its proper time, place and context. When experiencing PTSD, memory becomes fragmented, and the hippocampus has trouble coherently piecing together memory, from discriminating from past or present, and from integrating memory of experiences with feelings and factual knowledge. This is an extraordinarily distressing component of PTSD and manifests in the form of intrusive memories and flashbacks. Triggering memories provoke the amygdala, maintaining its hyper-activity.

The third area of the brain affected by trauma is the frontal lobe; specifically, the PFC. This area of the brain is involved in regulating behaviors, impulses, emotions, and fear responses. In those with PTSD, the PFC is notably less active and less able to override the hippocampus as it flashes fragments of memory, nor to signal the amygdala that the danger is not real.

As the above research suggests, the neuroplastic brain indeed responds to trauma. As certain areas of the brain become hyperactive, and others deregulated, throwing off the fine-tuned and exquisite orchestration that usually works to keep someone safe from real threats—PTSD is cultivated.

What are the positive benefits of mindfulness for adult patients suffering from PTSD in relation to the brain?

Mindfulness and the Brain:

There is a significant amount of data supporting mindfulness as a treatment approach for patients with PTSD. Much of the literature, however, doesn’t speak to the neurological changes that occur during the mindfulness process. Research regarding mindfulness mediation’s impact upon the brain in general points to changes in brain structure and function that could account for the reduction of symptoms of PTSD.

As I mentioned earlier, deregulation of the brain areas associated with emotional regulation and memory are key contributors to the symptoms associated with PTSD in addition to the over activity of the fear center, the amygdala. Mindfulness reverses these patterns by increasing prefrontal and hippocampal activity, and toning down the amygdala.

A recent study looking at the neural functional impact of mindfulness meditation on those with PTSD implicates the interaction of two “opposing” brain networks in mediating beneficial outcomes.

In this study, 23 male veterans who served in Afghanistan and Iraq were divided into different treatment groups, one of which included mindfulness-based exposure treatment (MBET).

Results indicated that while each treatment group showed promise, the men in the group receiving Mindfulness-Based Exposure Therapy (MBET) experienced actual post-treatment brain changes that indicate mechanisms by which mindfulness could potentially help in the treatment of PTSD.

Functional magnetic resonance imaging (fMRI) indicated that at the start of the study, the veterans showed increased activity in regions associated with perceived external threats. After receiving MBET, fMRI showed increased activity in what is known as the brain’s default mode network (DMN). The DMN consists of interacting brain regions associated with internally focused meandering and wandering thought. Additionally, fMRI also showed that the DMN increased its connections with what’s known as the Executive Network, associated with the purposeful shifting of attention.

Both these networks were working in sync, providing insight into how mindfulness can help people train themselves to get unstuck from a vicious cycle of negative thinking, often a cornerstone of trauma.

…Mindfulness can help people train themselves to get unstuck from a vicious cycle of negative thinking, often a cornerstone of trauma.

The small sample size, the gender bias of the group, and the inclusion of only veterans means that there is room for much more extensive empirical exploration with regards to mindfulness as applied specifically to those with PTSD.

Overall, these neural correlates of symptom reduction can potentially shed light on the therapeutic possibility of mindfulness-based treatments going forward. There is, without a doubt, great potential for these treatments in helping people better process trauma, and hopefully decrease a lot of potential suffering.

Yet, a caveat worth heeding: Given the precarious nature of the symptoms of PTSD, the most efficient and safe treatment should only be obtained by a professional. It is my opinion that mindfulness, as an integrative approach under professional supervision, is the most prudent.

In honor of PTSD awareness month, I invite you to learn more about the various aspects of PTSD as it relates to gender, relationships with others, chronic pain, heart health, and brain injury.

Please click here to download my free resource packet on PTSD. Inside you will also find helpful quotes and resources related to trauma and PTSD, and NEW this year, I have included an additional post on an oft-forgotten element of trauma: Post Traumatic Growth.