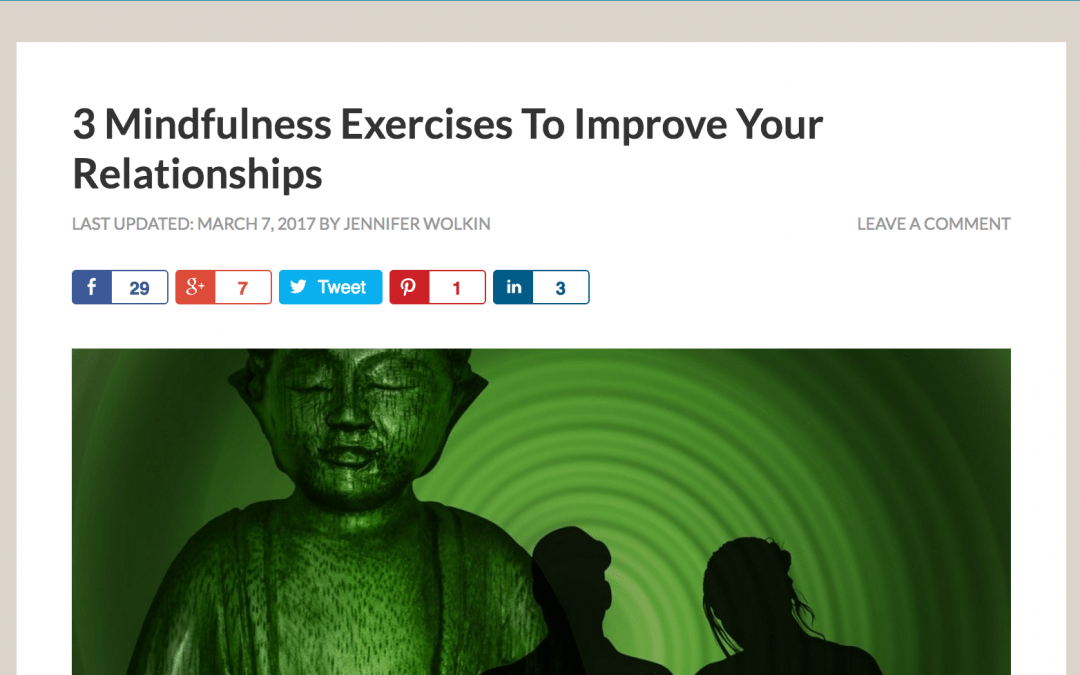 Do you ever struggle to connect or communicate with your partner? I mean, who doesn’t?

But what a lot of people don’t know is that brain science shows that practicing mindfulness can help you in this area of life.

You see, mindfulness is much more than meditation. It’s more like a fundamental approach to life.

It starts with choosing to become more aware of how we show up in life and making conscious choices about what our presence looks and feels like in each moment.

All of this can inform the way we are as individuals in our relationships.

Because mindfulness can help you cultivate healthier relationships through stress reduction, enhanced emotion-regulation abilities, and honed communication skills (Among other ways I am sure)!

We’ve all experienced that moment when we are so stressed that the little things start to bother us. Stress increases our irritability levels, and then inconsequential things start to elicit reactivity.

I know you know what I’m talking about…

Mindfulness meditation can help reduce stress, and consequently, make each individual in a relationship less likely to argue about the little things that—oftentimes unnecessarily—blow up into big things.

Here’s one quick mindfulness exercise to help you in moments like that. Try this stress-busting breathing with your partner.

It’s becoming clearer to researchers that practicing mindfulness meditation can help us regulate our emotions, and lash out less at one another!

How does that work?

That’s the part of the brain responsible for forethought, and what we call “higher order” functions.

But it doesn’t stop there. Mindfulness meditation is also associated with increased connection between the amygdala and pre-frontal cortex. This leads to greater integration of our emotions and intellect.

How This Can Help Your Relationship

But you might be wondering, how does this help us? Here’s an example.

When our partner says something we don’t like, it’s plausible that instead of thinking it through, we feel threatened. That activates the amygdala that readies us to attack back.

In truth, much of the time when our partner “acts out” it’s from a place of their own insecurity, and their own deep-rooted pain.

So instead of impulsively trying to attack back from one’s own “wounded place,” try responding with compassion for all of the pain both of you are experiencing by truly listening and then responding from a place that is less fear-based.

Slowly, but steadily, we can work together with our partner to decrease our amygdala volume!

Now, imagine that instead of immediately reacting based on fear, we take a moment to pause and reflect on why we feel threatened and then proceed to respond with more kindness.

We can then start to imagine that our significant other also has their own insecurities and hot-button issues. It’s hard, but imagine if each individual in a partnership practiced taking a few breaths before lashing out and attacking in return and instead responded with a calmer and less defensive demeanor.

We’d actually give one another the space to be heard, and the opportunity to communicate without our armor. WOW.

But how do we do this?

Each partner works on becoming more attuned to their own emotional landscape by starting to understand what triggers them most, and why.

For example, someone might immediately be on the attack if her significant other calls to say that they will be late to dinner. It’s important to understand why that call felt so threatening that it resulted in anger and lashing out.

Perhaps, and this is just an example, it taps into someone’s deeper fear of being abandoned by their partner. If possible, cultivate compassion for oneself for experiencing such deep pain, and even needing to be on the defensive.

This takes time, and it’s a process…one that is often worked upon in therapy.

Then, maybe try THIS:

Mindful listening is a core element of healthy communication.

Really taking the time to listen to how the other feels, without immediately and sometimes impulsively reacting, creates the space for both parties to feel heard and then to show up in kind with a more mindful ear.

I recommend you set a timer for five minutes. Then one partner begins to speak about whatever they would like (this isn’t the time to attack the other, this is just about practicing uninterrupted listening), which can include how they feel about the relationship or about anything at all.

Then, when the timer goes off switch roles so that the speaker now becomes the listener. Each time you practice the exercise, switch off who starts being the initial listener and vice versa.