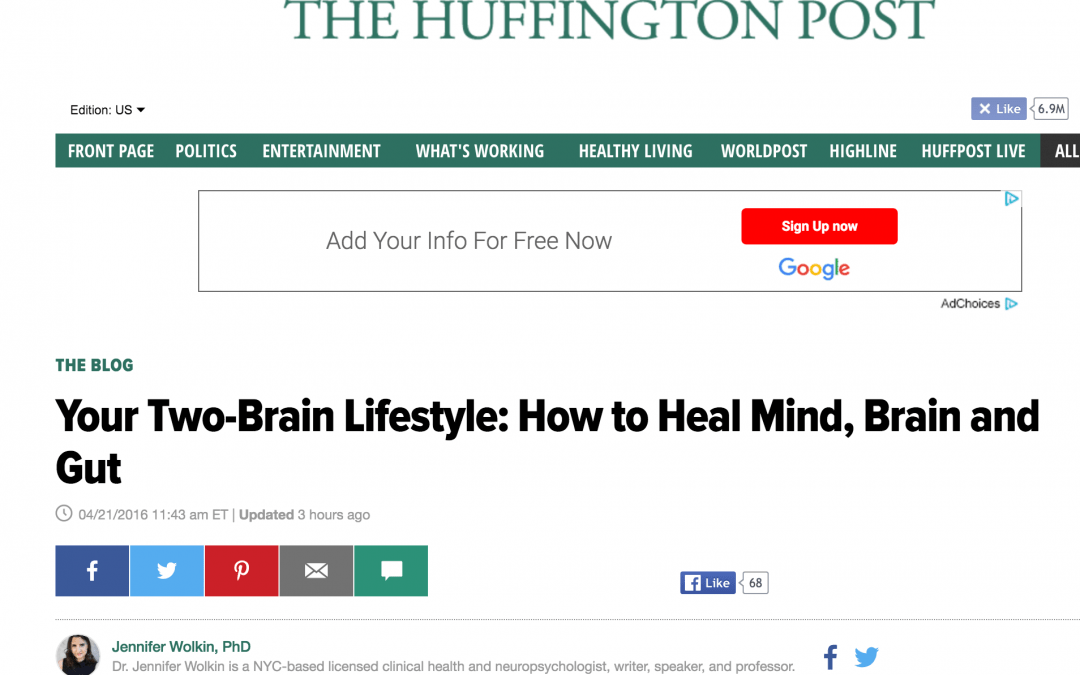 Repost: Your Two-Brain Lifestyle: How to Heal Mind, Brain and Gut 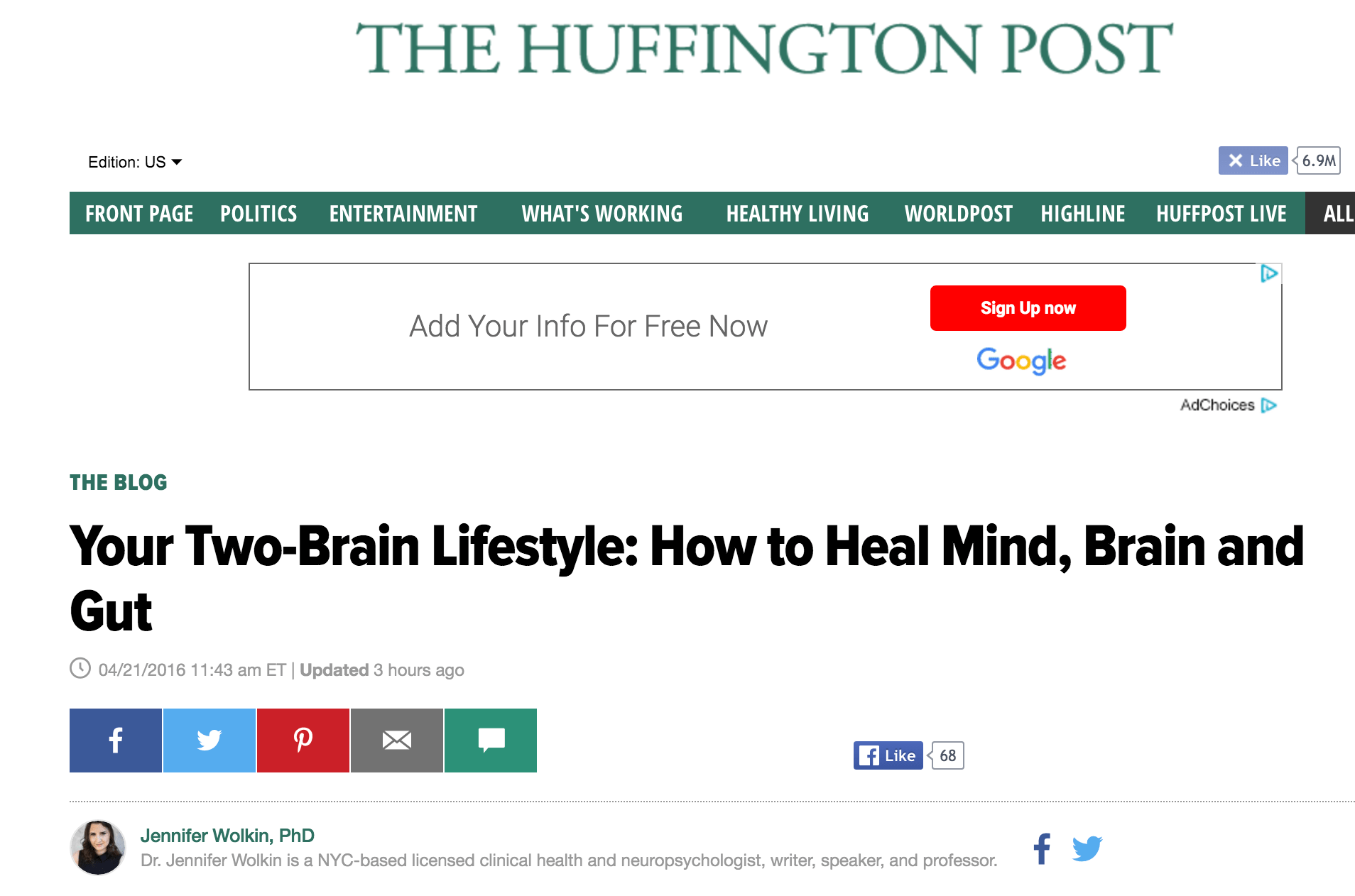 Less might sometimes be more, but two brains are most definitely better than one! How extraordinary then that research continues to confirm a second brain that resides in our guts.

Yes, our gut has its own neural network, the enteric nervous system (ENS). Our ENS doesn’t wax philosophical or make executive decisions like the gray shiny mound in our skulls. Yet, in a miraculously orchestrated symphony of hormones, neurotransmitters, and electrical impulses, both of our “brains” communicate back and forth.

This connection is actually what accounts for those proverbial butterflies in our stomach and has vast implications on our overall health and wellness. Changes in the diversity of the trillions of bacteria that reside in our gut (called the gut microbiota) can impact upon our mental state. And on the flip side, psycho-social factors, including the way we think and feel, have been implicated in gut problems.

Here are four ways to begin your two-brain lifestyle journey:

“Diet is a central issue when it comes to preserving our gastrointestinal health, because by eating and digesting we literally feed our gut microbiota, and thus influence its diversity and composition.” –– Professor Francisco Guarner (University Hospital Valld’Hebron, Barcelona, Spain)

There is more and more research linking diets to both our gut and brain health. Certain diets elicit a healthier bacterial balance. Overall, and generally speaking, a diet rich in whole, unprocessed, unadulterated, and non-genetically modified foods help to maintain a proper pathogenic gut bacteria ratio. More specifically, the following are key recommendations:

Probiotics can be found in foods such as yogurt, or kimchi, and can also be taken in supplement form. Among other benefits, probiotics keep the bacterial ecosystem in our gut healthy, which in turn helps keep us healthy overall.

The positive impact of probiotics on gut flora has been widely studied in the last few years. In a 2013 study in Gastroenterology, 12 of 25 healthy women ate a cup of yogurt twice a day for four weeks. The rest of the women ingested no yogurt. All women had pre and post brain scans while being asked to respond to a series of images depicting different facial expressions. Results indicated that the women who ate yogurt were calmer when shown various emotions than the control group. Showing that the yogurt changed the subjects’ gut microbiota, which also modified their brain chemistry.

This means probiotics are potential game changers when treating anxiety and mood difficulties.

It is hard to say this, given that a love for chocolate has a special place in many of our lives, but excess sugar upsets the balance in the gut by nurturing more pathogenic bacteria, which leads to increased systemic inflammation. And inflammation is a major player in the inception of chronic disease, including mental health difficulties — no good!

In a recent study, researchers fed a group of mice a diet high in sugar and then tested their mental and physical function. The sugar diet negatively impacted the mice’s gut microbiota, impaired their cognitive flexibility, and ability to efficiently adapt to changing situations. The change in gut bacteria also negatively affected the mice’s long-term and short-term memory.

Basically, sugar makes you forgetful and possibly impairs adaptability, but don’t fret, the chocolate craving can still be met: The darker the chocolate, the less sugar. Also, if you don’t want to cut sugar completely out of your diet, eating less overall can still improve wellness.

Ever feel like vomiting when you are scheduled for a job interview? That is just a crude reflection of how stress negatively impacts many aspects of our gut, but give exercise a try, it’s a well-known stress-buster!

A 2014 study found that rugby players not only have more diverse microbiota, but also a high amount of a particular bacterial species associated with decreased rates of obesity and metabolic diseases. While the study didn’t separate the effects of exercise, stress, and diet, it certainly provides evidence for exercise’s possible beneficial impact on gut microbiota diversity.

Our gut microbiota talk to the brain and impact how we think and feel, and, the way we think and feel has a profound impact upon the gut. Therefore, negative thinking styles and certain emotional states can disrupt gut functioning and even lead to dysfunction and disease.

Cognitive Behavioral Therapy (CBT) is a type of therapy geared toward identifying and reframing negative and counterproductive thought patterns. In a 2003 study of patients with IBS, a significant number reported less pain, bloating, and diarrhea after 12 weeks of CBT. Stands to reason that therapy should be part of a thorough treatment plan for chronic gut upset!

Studies have shown that stress puts us at risk for dysbiosis, a shift away from healthy gut diversity. This then strips us of a defense against infectious disease, which can potentially wreak havoc on the Central Nervous System (CNS).

Beyond utilizing exercise, which we already talked about, stress reduction and relaxation techniques, such as meditation, help bring the gut environment back to homeostasis. In a recent study from Harvard University affiliates, forty-eight patients with either IBS or Inflammatory Bowel Disease (IBD) took a 9-week session that included meditation training. The results showed reduced pain, improved symptoms, stress reduction, and a decrease in inflammatory processes.

Go with your gut

Just as the best way to boost our brain is by maintaining impeccable gut health vis-a-vis the content of our diet, so too, it might be impossible to heal a distressed gut without considering the impact of stress and our emotions. 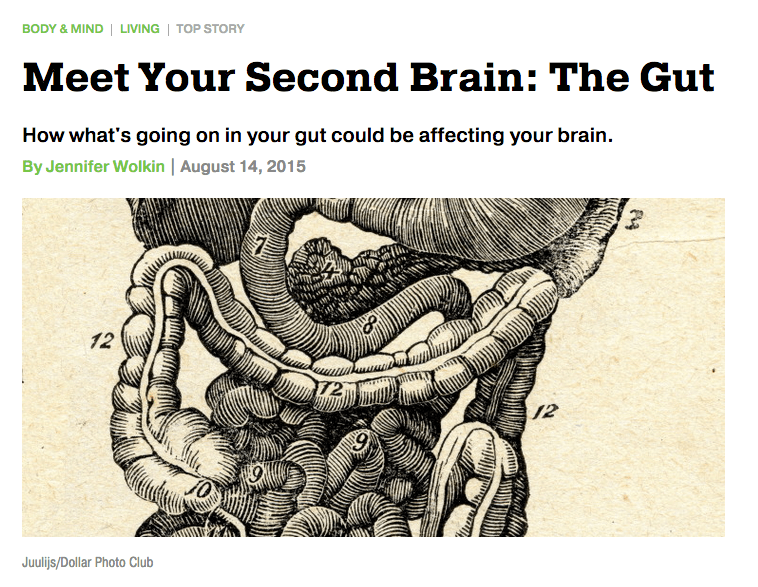 Most of us can relate to the experience of having butterflies in our stomach, or to a visceral gut-wrenching feeling, and how often are we told not to ignore our “gut-instinct” or “gut-feeling” when making a decision.

Even from our simple slang, it’s clear just how symbolically connected the gut is to our emotions. Now, there’s tangible proof to support these popular metaphors.

We all have a microbiome, and they are as unique as our neural pathways

Research has shown that the body is actually composed of more bacteria than cells. We are more bug than human! Collectively, these trillions of bacteria are called the microbiome. Most of those bacteria reside in our gut, sometimes referred to as the gut microbiota, and they play multiple roles in our overall health.

The gut is no longer seen as an entity with the sole purpose of helping with all aspects of digestion. It’s also being considered as a key player in regulating inflammation and immunity.

A healthy gut consists of different iterations of bacteria for different people, and this diversity maintains wellness. A shift away from “normal” gut microbiota diversity is called dysbiosis, and dysbiosis may contribute to disease. In light of this, the microbiome has become the focus of much research attention as a new way of understanding autoimmune, gastrointestinal, and even brain disorders.

The benefit of a healthy gut is illustrated most effectively during early development. Research has indicated just how sensitive a fetus is to any changes in a mother’s microbiotic makeup, so much so that it can alter the way a baby’s brain develops. If a baby is born via cesarean section, it misses an opportunity to ingest the mother’s bacteria as it travels down the vaginal canal. Studies show that those born via c-section have to work to regain the same diversity in their microbiome as those born vaginally. Throughout our lives, our microbiome continues to be a vulnerable entity, and as we are exposed to stress, toxins, chemicals, certain diets, and even exercise, our microbiome fluctuates for better or worse.

The gut as second brain

Our gut microbiota play a vital role in our physical and psychological health via its own neural network: the enteric nervous system (ENS), a complex system of about 100 million nerves found in the lining of the gut.

The ENS is sometimes called the “second brain,” and it actually arises from the same tissues as our central nervous system (CNS) during fetal development. Therefore, it has many structural and chemical parallels to the brain.

Our ENS doesn’t wax philosophical or make executive decisions like the gray shiny mound in our skulls. Yet, in a miraculously orchestrated symphony of hormones, neurotransmitters, and electrical impulses through a pathway of nerves, both “brains” communicate back and forth. These pathways include and involve endocrine, immune, and neural pathways.

At this point in time, even though the research is inchoate and complex, it is clear that the brain and gut are so intimately connected that it sometimes seems like one system, not two.

Our emotions play a big role in functional gastrointestinal disorders

Given how closely the gut and brain interact, it has become clear that emotional and psychosocial factors can trigger symptoms in the gut. This is especially true in cases when the gut is acting up and there’s no obvious physical cause.

The functional gastrointestinal disorders (FGIDs) are a group of more than 20 chronic and hard to treat medical conditions of the gastrointestinal tract that constitute a large proportion of the presenting problems seen in clinical gastroenterology.

While FGID’s were once thought to be partly “in one’s head,” a more precise conceptualization of these difficulties posits that psychosocial factors influence the actual physiology of the gut, as well as the modulation of symptoms. In other words, psychological factors can literally impact upon physical factors, like the movement and contractions of the GI tract, causing, inflammation, pain, and other bowel symptoms.

In light of this new understanding, it might be impossible to heal FGID’s without considering the impact of stress and emotion. Studies have shown that patients who tried psychologically based approaches had greater improvement in their symptoms compared with patients who received conventional medical treatment.

Along those lines, a new pilot study from Harvard University affiliates Benson-Henry Institute for Mind Body Medicine at Massachusetts General Hospital and Beth Israel Deaconess Medical Center found that meditation could have a significant impact for those with irritable bowel syndrome and inflammatory bowel disease. Forty-eight patients with either IBS or IBD took a 9-week session that included meditation training, and the results showed reduced pain, improved symptoms, stress reduction, and the change in expression of genes that contribute to inflammation.

Poor gut health can lead to neurological and neuropsychiatric disorders

Vice-versa, poor gut health has been implicated in neurological and neuropsychiatric disorders. Disturbances in gut health have been linked to multiple sclerosis, autistic spectrum disorders, and Parkinson’s disease. This is potentially related to pro-inflammatory states elicited by gut dysbiosis-microbial imbalance on or inside the body. Additional connections between age-related gut changes and Alzheimer’s disease have also been made.

Further, there is now research that is dubbing depression as an inflammatory disorder mediated by poor gut health. In fact, multiple animal studies have shown that manipulating the gut microbiota in some way can produce behaviors related to anxiety and depression. (Maes, Kubera, Leunis, Berk, J. Affective Disorders, 2012 and Berk, Williams, Jacka, BMC Med, 2013).

Our brain’s health, which will be discussed in more depth in a later blog post, is dependent on many lifestyle choices that mediate gut health; including most notably diet (i.e., reduction of excess sugar and refined carbohydrates) and pre and probiotic intake.

The brain-gut connection has treatment implications

We are now faced with the possibility of both prevention and treatment of neurological/neuropsychiatric difficulties via proper gut health. On the flip side, stress-reduction and other psychological treatments can help prevent and treat gastrointestinal disorders. This discovery can potentially lead to reduced morbidity, impairment, and chronic dependency on health care resources.

The most empowering aspect to the gut-brain connection is the understanding that many of our daily lifestyle choices play a role in mediating our overall wellness. This whole-body approach to healthcare and wellness continues to show its value in our longevity, well-being, and quality of life: that both physical and mental health go hand-in-hand.